I was playing the Indiana Jones game at Seattle’s Pinball Museum when the owner came by to turn the game off after I was finished. I asked why, since all the other games were on and being played. He said that the power supply overheats after the game has been played for a couple hours and the rotating Inca idol which is used to dispense new balls during multiball loses the ability to turn. The 5V power supply that it draws from becomes extremely hot and inefficient, and can no longer supply enough voltage and current to operate everything depending on that power rail. The only answer is to shut the game down for a few minutes and let it cool off. The owner was planning on replacing the power supply with a better one that could handle heavy loads with plenty of margin, but the example stuck in my mind. 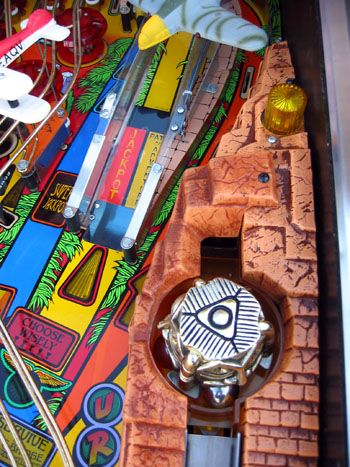 Top view of the rotating Inca head in the right ramp. Image courtesy of The Internet Pinball Database.

Many pinball games use solenoids to implement a “vertical up-kick” or VUK mechanism. These VUKs are responsible for taking the ball and kicking it up in to a ramp or on to a different level of the playing field. During the opening tournament of 2016’s first pinball season –each year has two seasons since pinball doesn’t really care about the weather :-) — I got to play on the Demolition Man game at a nearby bar. There were nearly 300 people in attendance for opening night and all the games were getting heavy play, with lines for each one, and Demolition Man was especially popular. By the time my team played on it the game had probably been in use continuously for several hours. That game relies heavily on several VUKs to push the ball up into tracks when the player locks the ball in certain spots. There is one VUK which is very easy to hit, and when I played the solenoid could not get the ball up high enough to get out of the ramp and it kept falling back, only to be hit up again by the struggling VUK. Each time this happened I got points, and as the minutes passed by I just leaned back with my arms crossed and watched the free points rack up. Eventually the machine was able to kick the ball onward and I could resume play, but I intentionally hit the ball back in to the mechanism to get more free points. I ended up winning this game due to this fortuitous failure and I assume the reason my opponents didn’t exploit this is that they may have thought it was a fluke, and not realized that the game would continue to struggle with this until it was turned off and allowed to cool down. Now that I’ve noticed this quirk, it could be exploited by choosing to play this table only toward the end of a tournament when it has been played a few times already and “warmed up.” 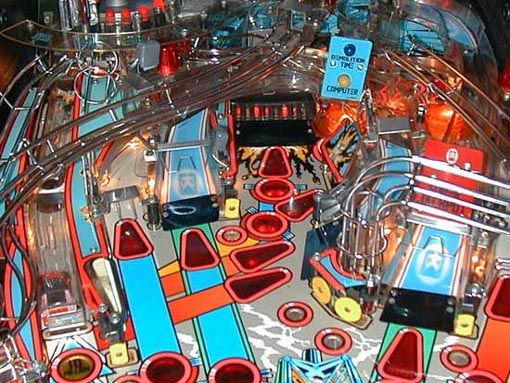